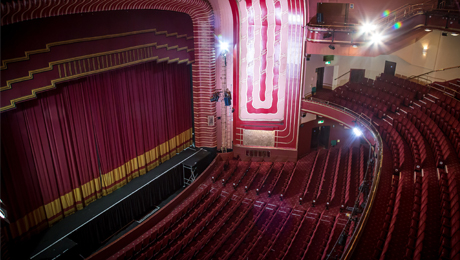 New Theatre Oxford is the main commercial theatre in Oxford and has a capacity of 1,785 people.

It is located on George Street, in the centre of the city, and puts on a wide variety of shows, from musical theatre, to stand-up comedy and concerts.

The venue was previously known as the Apollo Theatre Oxford or simply The Apollo from 1977–2003.

There has been a theatre on the corner of George Street for almost 170 years. The first theatre built in 1836 was known commonly as the ‘Vic’, and later as the ‘Theatre Royale’ after the company that played there. Forbidden to perform plays during the University terms, the lessee of the theatre resorted to presenting ‘concerts’ or music hall entertainment and by 1880 the theatre had become quite run down.

At the instigation of members of both town and gown a company was formed to raise money for a theatre to be used by University and town players as well as by professionals. In February 1886 the Oxford University Dramatic Society opened the second New Theatre with ‘Twelfth Night’. Designed by H.G.W. Drinkwater and with a 1000-seat capacity the second New Theatre was damaged by fire in 1892 and altered in 1908, when the seating capacity was increased to 1200.

In 1908 the Dorrill family took over the New Theatre and ran the venue for the next sixty-four years. In 1933 Stanley Dorrill determined to build ‘the most luxurious and comfortable house of entertainment in England’ and commissioned a new building from the well known theatre architects William and T.R. Milburn of Sunderland. The Milburns co-operated on the art-deco interior with T.P Bennett and Sons (who had designed the Saville Theatre in London). The Milburns extensive theatre oeuvre included the Sunderland Empire and London’s Dominion Theatre.

The third New Theatre opened in February 1934 and with a wonderful revolving stage (mechanism extant) and increased capacity of 2000 (1,710 seated) attracted all the great dramatic actors, popular and operatic singers and musicians, music-hall entertainers and matinee idols of the age to Oxford. The New’s renowned annual pantomimes (with Vera Legge’s famous Oxford Babes during the war years) became an Oxford family ritual.

This was the golden age lasting until the advent of television in the 1950’s when running large theatres became increasingly difficult.

In latter days musicals and play productions were supplemented by pop and rock concerts.  In 1972 the Dorrills were bought out by the provincial theatre chain Howard and Wyndham, and in 1977 Apollo Leisure took over the lease of the theatre renaming it ‘The Apollo’. Apollo Leisure were bought out by SFX in 1999, followed by Clear Channel Entertainment in 2001. Following a refurbishment in 2003 the theatre reverted back to the name New Theatre, with Clear Channel Entertainment's theatre division becoming Live Nation two years later.

The theatre is now owned by The Ambassador Theatre Group (ATG) who are the biggest theatre owners in the country, owning 40 theatres across the UK.

Audiences at the theatre can see leading opera and ballet companies, from Welsh National Opera to the English National Ballet, contemporary dance, hit musicals like Chicago and Guys and Dolls, and of course sell-out pop concerts. The venue’s current capacity is 1785 and the building is not listed.

Parking in central Oxford can sometimes be difficult so customers are advised to use the park & ride facilities when possible. For more information on parking please visit the Oxford City Council website or the Park and Ride website.

Get up to the minute live Frixo traffic updates

For customers arriving by train, the station is only a ten minute walk from the theatre. For times and more information please visit The Train Line

George Street: There is no parking or dropping off in George Street at all without a permit. A permit will be needed for coaches/mini buses to enter Oxford City Centre and will be specific to that evening’s performance with set times. There is no parking permitted anywhere on George Street. To apply for a permit, you will need to call 0845 634 4466 (Parking Shop on Speedwell Street). Coaches without a permit cannot go any further than the bus lane junction at the end of Gloucester Street.

Beaumont Street: There are various restrictions on Beaumont Street. Coaches are allowed to drop off and pick up, but for no longer than five minutes in the loading bay or the coach stop just past the Randolph Hotel on the left hand side.

If the minibus is less than thirteen seats (including driver) then they are able to park in the pay and display until 6.30pm.

Calls cost up to 7p per minute, plus your phone company's access charge.